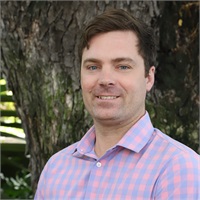 Grant joined Takagi & Takagi in 2019 after spending ten years on Oahu in the local solar industry. As Senior Project Manager for REC solar, his responsibilities included oversight and coordination of all commercial projects across the Hawaiian Islands, developing client relationships, sourcing subcontractors and engineers, and managing related financials.

Grant joined David and Megan’s team as an Analyst, specializing in account and data management, research, and client support. He holds securities licenses Series 7 and 66, and is also a licensed life and health insurance agent.

A lifelong surfer growing up on the Eastern Shore of Maryland, Grant was drawn to Oahu’s waves after completing his Bachelor’s degree in Geography from the University of Maryland. He married Taea in 2014 and took a bigger leap by joining her family’s business in 2019. He enjoys golfing and spending time with Taea and their two sons, Orion and Phineas.